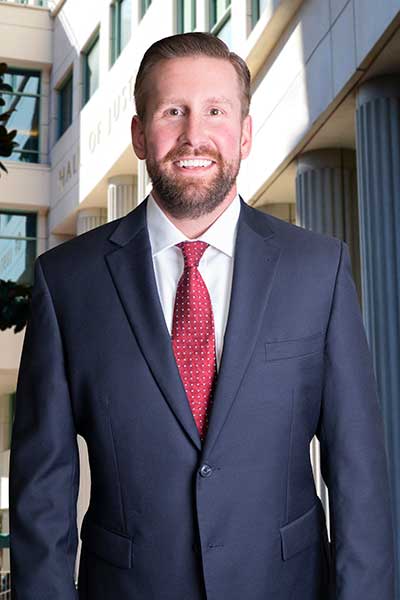 Jesse Allen is a litigator and trial lawyer. He represents businesses, homeowners, and other individuals faced with a civil lawsuit. He has obtained favorable jury verdicts on behalf of his clients in cases involving claims of motor vehicle negligence, premises liability, and assault and battery, including multiple outright defense verdicts. Jesse has resolved hundreds of lawsuits ranging from property line disagreements between two neighboring homeowners to claims of wrongful death and traumatic brain injury. He handles all aspects of these claims from pre-litigation investigations through trial. He has argued cases before the California Courts of Appeal when necessary.

Jesse joined Gates, Gonter, Guy, Proudfoot & Muench in 2016. He was made a partner of the firm in 2021. He operates out of the firm’s San Diego office, but litigates cases throughout Southern California. He was named to the list of San Diego Super Lawyers Rising Stars in 2021 and 2022.

Jesse was born in Seattle and graduated from Central Washington University. He was a member of the football team and was named to the Dean’s List for academic achievement. Jesse then obtained his Juris Doctor from Thomas Jefferson School of Law, graduating in the top 15 percent of his class. He was a member of the Moot Court Honor Society and Alternative Dispute Resolution Team. He was one of few students named to the national list of Who’s Who Among Students in American Universities and Colleges for in curricular and extracurricular achievement.

Jesse is a sports fan, car enthusiast, and enjoys spending time in the outdoors with his wife and Labrador.