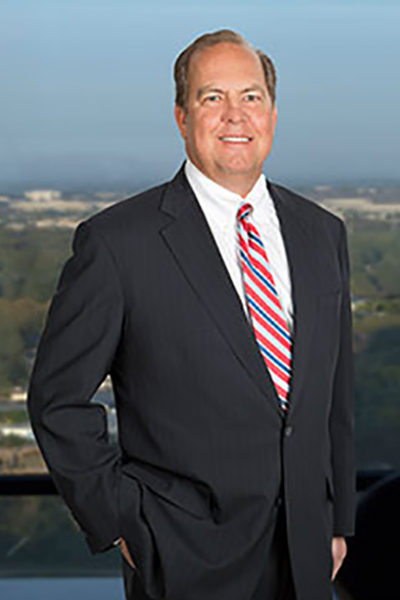 Robert Gonter has served as lead counsel in over 1000 trials and arbitrations. His experience involving multiple parties has led to him being chosen as the lead counsel for a large homeowners’ association involved in a personal injury lawsuit resulting from a catastrophic bicycling accident, causing spastic quadriplegia that required the lead coordination of over 30 law firms.

He has extensive experience handling injury cases involving spinal cord damage, severe burns, electrocution, brain damage, retinal and corneal detachment and transplant surgeries, as well as injuries to knees, shoulders, arms, legs and hands, and wrongful death. Robert is an arbitrator and mediator for Los Angeles and Orange Counties. He has received an AV rating from Martindale-Hubbell and has been a member of the American Board of Trial Advocates since 1996.

Robert’s Product Liability Defense work is unique because he provides valuable insight resulting from experience representing the four main parties typically involved in product liability litigation: the manufacturer, the distributor, the retailer and the repairer.  Robert is able to efficiently and cost effectively resolve product liability lawsuits because he knows how the law treats each participant in the chain of control over the product by the time it is eventually sold to the consumer.

In addition to representing the manufacturer, distributor, seller and repairer of   products, Robert has handled product liability lawsuits base on multiple legal issues:

To help prevent product liability losses, Robert developed a list of documents clients should maintain throughout the life of a product.  The goal of Robert’s checklist is to help his clients demonstrate, before a jury, the existence of an effective and conscientious safety program that resulted in a product that was carefully designed, well-made and appropriately marketed.

From 1981 to the present, Robert has been lead counsel in more than 76 jury trials, most of which resulted in defense verdicts.  He has also arbitrated and mediated in excess of 1000 cases in Los Angeles, Orange County, San Diego, and San Bernardino Counties.

Robert became a partner with a law firm that specialized in the defense of large corporations and individuals. Three days after he was sworn in he was selected to be the lead counsel at a deposition with over eight other law firms to question the individual who pushed the plaintiff over a balcony that resulted in his paraplegia. He tried his first Superior court jury trial just three months after being sworn in and has never stopped. In 2001, he started his own firm with the major Litigation partners from his old firm.

Employment Litigation: Robert has been the primary Southern California defense attorney for the nation’s largest insurer of automobile dealerships. Most of these matters involve employment- related claims. He has handled and taken to award cases involving sexual, racial, religious, and age related discrimination. One case that involved an African American women involved all allegations of discrimination and with over a $6,000,000.00 demand and he defensed the case in its entirety. The 22 page award, written by retired Judge Robert Polis, and can be viewed, on line, at the firms website.

Complex Litigation: Robert has extensive experience handling complex cases involving multiple plaintiffs and defendants. This includes representing one of the largest roofing companies in the U.S., managing the client’s simultaneous exposure to construction defect claims filed in multiple states. Robert’s experience involving multiple parties led to him being chosen as the lead counsel for a homeowners’ association involved in a personal injury lawsuit (resulting from a catastrophic bicycling accident, causing spastic quadriplegia) that required the coordination of over 30 law firms.

Mold Litigation: Mold litigation may involve the cost of mold remediation, loss of property, and health-related claims. We represent owners, contractors, property managers, architects, and suppliers in such matters. Robert has handled numerous cases and attended seminars regarding mold and has become an expert in the field.

HOA Law: Robert represents homeowner associations, boards (directors and officers) and individual HOA members in a wide range of litigation matters, including CC&R enforcement, assessments and fines collections, construction defects, director and officer liability, insurance coverage litigation and cumis counsel matters. He has recovered thousands of dollars from plaintiffs suing HOA’s, when the defense had previously offered of $270,000.00.  He also represented a group of lawyers against another group of lawyers and after winning dispositive motions he received money from the plaintiffs, in that case as well, to reimburse the HOA for attorney fees.

Construction Defect Litigation: Robert has extensive experience handling complex cases involving multiple plaintiffs and defendants. This includes representing one of the largest roofing companies in the U.S., managing the client’s simultaneous exposure to construction defect claims filed in multiple states. He is currently representing numerous subcontractors involved in roofing, electrical, drywall, plumbing, HVAC, and an audio video contractor for a 30,000 square foot home in the gated community of Bradbury, California.

Robert’s experience involving multiple parties led to him being chosen as the lead counsel for a homeowners’ association involved in a personal injury lawsuit (resulting from a catastrophic bicycling accident, causing spastic quadriplegia) that required the coordination of over 30 law firms.

Severe Burns: Plaintiff was a five year-old in the garage with his younger brothers.  He got a hold of a gas can on a lower shelf and poured it on his “Big Wheel” tricycle.  The water heater, manufactured by Sears, was installed on the floor and a pilot light ignited the gasoline, causing severe third degree burns to 90% of the child’s body.

Electrocution Burns: Plaintiff was a 19 year-old rock musician who was playing a concert at a residence.  It had been raining and a lot of water was being tracked through the home.  The plaintiff, while holding on to the microphone and guitar, and standing barefoot on the wet rug, was electrocuted and died immediately.  Manufacturers of the electrical equipment, as well as the homeowner, were sued.

Electrocution (6 Surgeries): The plaintiff was a 25 year-old who had watered the yard and noticed some smoldering in the bushes.  She watered the smoldering area and bent down to pick up what she though was a doormat, which was actually an electrical box that had melted down due to a surge in a SCE bus box.  Plaintiff sustained severe scarring and burning, which resulted in numerous surgeries to her wrist.

Power Saw Lacerations: Plaintiff was a handyman using a weed whacker, designed and manufactured by the defendant.  While using the week whacker, the chain allegedly failed to disengage and severely injured plaintiff who sustained numerous lacerations.

Spastic Quadriplegia: Plaintiff was an eight year-old who was riding a bicycle that had been purchased and assembled by an individual whom the plaintiff borrowed the bike from.  The plaintiff, while weaving in and out of the median lines, allegedly lost control of his bicycle due to the negligently designed roadway, negligently manufactured bicycle and was subsequently contacted by an oncoming vehicle.  Plaintiff became a spastic quadriplegic, requiring extensive lifelong care.

Nail Gun Explosion: Plaintiff was a contractor using a pneumatic nail gun to build a corral.  He was using a compressed air tank due to the fact that the corral was too far for his compressor to reach.  After he had emptied the compressed air tank, he borrowed a friend’s oxygen-acetylene set-up and hooked the pneumatic nail gun to the oxygen tank.  While inserting the last nail in the fence, the nail gun exploded, allegedly due to the use of the oxygen and plaintiff sustained severe facial and eye lacerations as well as extensive hearing damage (ruptured ear drum and loss of high frequency hearing in both ears).  Flying metal lacerated both eyes, necessitating a series of extensive reparative procedures, including retinal detachment and corneal transplant surgeries.

Fire Eruption from Non-Pressurized Gas Tank: Plaintiff was in Bend, Oregon and had stopped to fill up his car at a local gas station.  He pulled into the gas station and there was a motor home immediately adjacent to the gasoline pumps with its pilot light lit.  When plaintiff removed the stant gas cap, the pressure caused a surge of the gas fumes, pulling the pilot light from the motor home into the plaintiff’s gas tank, causing plaintiff sever third degree burns over his entire body.

Water Skiing Accident: Plaintiff, while learning to water ski with her boyfriend, severely injured both knees, requiring surgeries after falling off the water ski and was injured when it failed to release.

Robert has spoken at the CLAIMS convention and has conducted seminars in the anatomy of a lawsuit, wrongful death, mediation, mock arbitration, successful negotiations and uninsured motorist arbitration. He has also been a contributing editor for the Liability Claims Practices publication of the American Institute for Chartered Casualty Underwriters and the Insurance Institute of America.

Robert spends his spare time with his four children and his wife, coaching AYSO Soccer and Little League Baseball. He is also involved with the Boy Scouts of America, having obtained the rank of Eagle Scout. He enjoys all sporting activities, such as snow skiing, golf, tennis, racquetball, basketball, softball and swimming, motor boating and waterskiing.